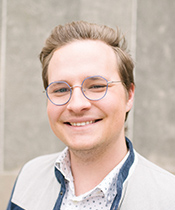 His parents started him on violin before age three. He would go on to switch to viola, also taking lessons in piano. When he entered high school, he became involved in theatre, which led him to pursue a Bachelor of Music in musical theatre at Baldwin Wallace University Conservatory of Music. During that time, he had leading roles on professional stages including Omahas Shakespeare on the Green and Timber Lake Playhouse in Illinois. Recently, has sung with Opera Omaha, Resonance, the Steamboat Springs orchestra, and in various solo and chamber ensemble capacities.

Since college, he has pursued a music composition career. His primary project has been composing the repertoire for the String Sprouts program created by the Omaha Conservatory of Music, arrangements of which have been performed by the Omaha Symphony. He has also worked on a number of video game and film scores.

As a producer and arranger, Dryden has been fortunate to collaborate with artists such as YEVA, Heirloome, and Claxy. His own songs are written under the name Dryden Thomas.

When not working on music, he can be found petting his two hounds, playing video and/or tabletop games, and watching horror movies with his husband.