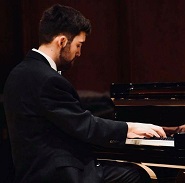 Lance has been playing clarinet in school since 2004 in school. In high school, he served as Drum Major for two years and one year in college, marching clarinet in the years in between. He has performed in marching band, pep band and concert band at Shenandoah High School, Iowa Western Community College, and University of Nebraska at Omaha. Having travelled as well to perform, he has had the honor of performing at the MidEurope Festival in Austria and in Carnegie Hall in New York City. Lance has also played the piano since he was eight years old. He studied piano as his primary instrument during his undergraduate at UNO, learning from great teachers like Dr. James Johnson and Dr. Kristin Taylor. Having recently graduated from UNO with his PK-12 Music Education degree, he is excited to start his official teaching career as Band Assistant at Elkhorn Grandview Middle School.