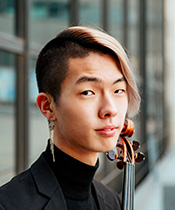 Minnesota native Joshua Choi is a freelance violist in the Twin Cities area and serves as Shop Manager for the Paul A. Schmitt Violin Shop. During his early years, Choi was a member of the Greater Twin Cities Youth Symphonies. His experience in these ensembles ignited a passion for music that continued to develop throughout his collegiate years, where he had opportunities to perform across the United States and Europe.

Choi holds a Bachelors Degree in Viola Performance from the University of Northwestern, St. Paul where he studied with Violin Pedagogue, Dr. Stephanie Allen and privately with former Minnesota Orchestra Principal, Richard Marshall. He has received coaching from other professionals, including SPCO and Minnesota Orchestra Principals Maiya Papach and Rebecca Albers. He also is a founding member of Oak Grove Chamber Music and performed in their debut performance series in August of 2020.

Choi maintains a small private studio in the Twin Cities and continues to perform in solo recitals, chamber ensembles, and local orchestras. He is an enthusiastic teacher for both beginning and advancing violin and viola students. He also has served as a musical intern and chamber ensemble coach at the Upper Midwest String Camp.