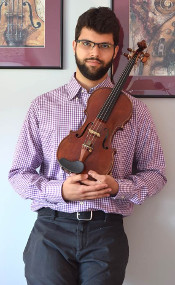 Brazilian born violinist Romulo Sprung began his studies on the violin at the age of nine, under the instruction of Shinobu Saito. At thirteen, he won his first national competition for young artists, the XVI Young Instrumentalists of Brazil Competition. He was also awarded second place at the Paulo Bosisio National Competition, a prestigious competition held in Brazil for violinists of all nationalities.

As a violin teacher, Romulo has been teaching extensively for the past 10 years. His main focus is on the Suzuki method, in which he is a certified teacher, and has taught in Suzuki music festivals in Brazil. While pursuing his master's degree at Duquesne University in Pittsburgh, PA, Romulo taught violin to students as part of his graduate teaching assistantship, and has been working on building his private studio since then.

Romulo has performed in some of the most prestigious halls in the U.S. and Brazil, including Heinz Hall, in Pittsburgh, PA; Symphony Center, in Chicago, IL; and Sala Sao Paulo, in Sao Paulo, Brazil. As a freelance violinist, he has performed with the Illinois Symphony Orchestra, Wheeling Symphony, Northwest Indiana Symphony, and the Sunflower Music Festival Orchestra. In the latter, he had the opportunity to perform together with other musicians from professional orchestras across the U.S., including Chicago Symphony, Cincinnati Symphony Orchestra, and Pittsburgh Symphony. Romulo has also played under maestros Kurt Mazur, Manfred Honeck, and Alondra de la Parra; and had the opportunity to play in master classes for Shlomo Mintz, Noah Bendix-Balgley, Andres Cardenas, Miriam Fried, and other prestigious violinists.

Currently studying with violin pedagogue Sally O'Reilly, Romulo is pursuing his DMA in violin performance at the University of Minnesota. He also studied with Yuan-Qing Yu, Charles Stegeman, and Fredi Gerling, and holds degrees from Roosevelt University in Chicago, IL; Duquesne University in Pittsburgh, PA; and the Federal University of Rio Grande do Sul, in Brazil.