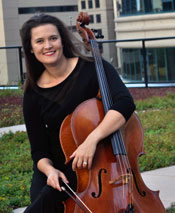 An accomplished performer and instructor, Ms. Veronica Hudacek brings her unique and varied background to her many performing and instructional endeavors. Upon her recent return to Minnesota, she was awarded the position of Principal Cellist with both the Rochester Symphony Orchestra and the La Crosse Symphony Orchestra for their upcoming concert seasons. As a freelance musician, Veronica has performed nationally with artists such as Rod Stewart, Carlos Santana, Mannheim Steamroller, Josh Groban, Michael Buble, and The Trans-Siberian Orchestra. In addition, she has performed at world-renowned venues including Lincoln Center's Alice Tully Hall, the Kimmel Center, Boardwalk Hall in Atlantic City, the Wells Fargo Center, and Minnesota's Orchestra Hall, among others.

Ms. Hudacek received her Master of Music degree from Temple University as an Alice Tully Scholarship recipient under the mentorship of Jeffrey Solow. She also studied with Tanya Remenikova at the University of Minnesota, where she received her Bachelor of Music and further honed her performing experience as a Performing Associate at the Bowdoin International Music Festival for three years, where she worked under the tutelage of Peter Howard. She has also appeared in master class performances for artists such as Steve Doane, Anthony Ross, Peter Stumpf, and Jean-Michel Fontenau.

In addition to her music training, she has been actively mentoring and conducting young artists on cello, violin, and viola through her work with the Symphony in C and the Philadelphia Youth Orchestra's Tune Up Philly! Program, the South Eastern Minnesota Youth Orchestra Philharmonic orchestra, the Sartory String Quartet Summer Institute and as a private music instructor. She has over 10 years of teaching experience working with a wide array of ages and abilities, from students as young as four years old to adult beginners as well as pre-conservatory students. Her teaching method puts focus on the individual and what they hope to gain through their musical pursuits. She emphasizes playing in a healthy and relaxed manner, and finding what works best for the student. She incorporates her extensive knowledge of music theory and technique to build a solid foundation for a lifetime of musical enjoyment.