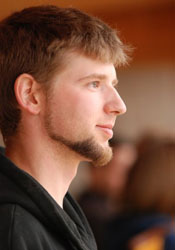 Joe Holmes has been playing the drums for nearly two decades now. It's brought him all across the country playing for crowds big and small. After hitting a plateau in high school Joe opted to take an independent study in place of band to put together an audition. That audition would land him a spot in the 2003 world champion Blue Stars drumline.

After two summers of corps style drumming Joe was accepted into the University of North Texas music program. He studied there for five years playing with a wide variety of ensembles including steels bands, drumlines, symphonies, and of course the occasional late night jam session.

After meeting his soon to be wife they moved back to his homeland where they've been ever since. Bouncing around the Midwest eventually landed him here where he teaches all things percussion, runs a few drumlines here and there, and occasionally does full percussion overhauls for band directors here in the metro.

On a completely different note Joe is a member of Twin Cities Terrors all-star men's roller derby team. He travels across the country as Egon Strangler challenging teams from Pudget Sound to New York City. You can find more info about when he's skating next, how much fun it is to knock people over on roller skates, and how awesome roller derby is at tcterrors.com, or just ask Joe about it. He loves to talk about derby.