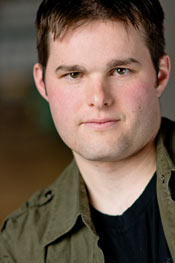 Luke has performed professionally with the Helena Theatre Company as Mr. Erlanson in A Little Night Music, and with the Nashville Opera for five seasons, including a role as Man 1 in the world premiere of Elmar Gantry. Other operas include Carmen, Faust, Turandot, Aida, and the Student Prince. Luke has also been featured as a soloists and section leader in several professional choirs including the St. Paul Methodist Church Choir in Nebraska, the Music City Community Chorus in Tennessee, and St Peter's Cathedral in Montana. His recording experience includes the self-released EP album "The Chosen". Luke has sung in such studios as Ocean Way, Castle Studios, and RCA Studio B. He's comfortable in many vocal styles including opera, rock, jazz, and country. His teaching philosophy centers on developing a love for the art of music and for sound, healthy vocal production. Luke earned a Master's degree in Vocal Performance from the University of Nebraska-Lincoln and a Bachelor's degree in Commercial Music from Belmont University.

Luke has requested a minimum age of 6+ years old.