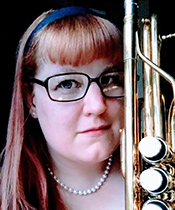 Lianne has been teaching since 2010 and wants to make sure lessons are fun, not just educational. Lianne is a Northern Minnesota native and has been playing musical instruments since 1995. Lianne received the John Philip Sousa Award in 2002 and studied under Gary Schmidtke and Rich Mowers from 1996 to 2002 at Esko High School. Lianne is currently principle bassoon in the Proctor Community Band and previously played principle bassoon in the Duluth Symphonic Winds Community Band as well as principle oboe in the Duluth Civic Orchestra. Besides being a musician, Lianne is also a dog mom and a wife.

Lianne has requested a minimum age of 9 years old.